We had a customer call us with a few major leaks on his office building. There are two sections that extend off the front and back of the building that create foyers over the entrances. He had a modified bitumin roofing system on a flat roof and it was not holding water anymore. Not just any roofer is able to work on such dangerous landings as this, but The Pros at Jabeau can. We tore off the old roofing system and added a new Duro-Last PVC system to provide him with a leak free guarantee!!

Another lovely customer called us for roof replacement in North Richland Hills, TX shortly after some late season storms rolled through.

See All Before & After Images

Click the icons to see what our customers had to say.

Here at Jabeau, we specialize in energy-efficient and affordable roofing throughout North Richland Hills. With years of experience in the industry, you can trust our professionals to provide you with the best solution to fit your roofing needs.

If you are in North Richland Hills, TX or nearby, call or contact Jabeau today for a free estimate! 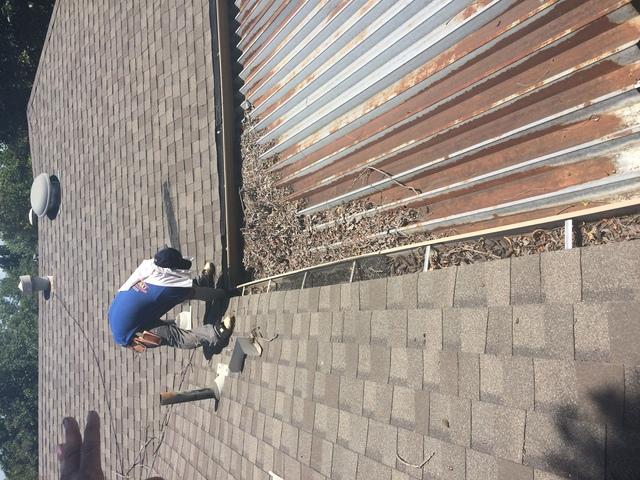 We had a customer recently call about numerous leaks on her roof. This was an existing customer that we had replaced the roof 6 years ago for and was...
Click to read solution...
More Case Studies
Photo Galleries From North Richland Hills

Jabeau went out to the customer's house to see the extent of the damage caused by a recent storm that came through the North Richland area. The customer needed a full roof replacement which is shown in the photos that were taken after the roof installation was completed. The customer couldn't have been happier with the results!

We were called out to this customers house for roof repair in North Richland Hills, TX due to a leaking chimney as well as interior sheetrock damages. We had her on the list of projects to get to, when a rare, end of the year hailstorm hit North Fort Worth.

A few days after the storms had passed, one of our DFW consultants, Mikel Grant, went over to survey the damage. Seeing as we had already contracted the homeowner for repairs, he wanted to make certain there was not any damage that would be covered by the insurance, causing the homeowner to waste money on the repairs.

It did not take many steps off the ladder before Grant realized her house had indeed suffered from the recent hailstorm. He immediately told the homeowner and she was able to call her insurance and have an adjuster out within days.

At the adjuster meeting, it was apparent quickly that this roof was a total loss and our quick thinking saved our customer from unnecessary out of pocket expenses.

While we were in the process of installing her new roof, we could not help but notice the chimney was in shambles. Bricks were deteriorating and crumbling atop her gorgeous new roof. After much deliberation on how to solve this problem, the homeowner and consultant determined we should cover the failing chimney with new Hardy Siding. This created an entirely new look to her home, as well as took away what was quickly becoming an eyesore to our lovely customer!

We are proud to say that we have grown another customer for life with this customer and due to our diligence and attention to details, have shown why those that know best, choose the PROS at JABEAU!